It’s been a little over a month since I last posted here. Forgive the hiatus; I’ve been knee-deep in various projects, including but not limited to:

The main time suck in that equation – the thesis – is done now. Seven stories, a preface, and a bibliography of influential work, all done. Meanwhile, I’m done with six of the nine stories for the workshop; the other three will be done by the end of this weekend, if not sooner. There’s a lull in my work at Weird Fiction Review and Cheeky Frawg, although that will likely kick up again in January after my graduation. My class at the local junior college is finished, finals and everything submitted. All that remains now is my graduating presentation and continuing to submit stories.

Given all this free time, I have some ongoing goals I want to pursue, one of which is to simply read more and read on a regular basis. I love reading, but it’s largely been determined by my schoolwork and whatever I might have been working toward at the time (for instance, for my essay on nonlinear structure, I read stories that utilized nonlinear structure and narratology texts). It’s been awhile since I could pick something up and read it just because I want to.

Enter my boss at Cheeky Frawg and Weird Fiction Review, Jeff VanderMeer. When he took me on as an intern, one of the things he offered me was occasional shipments of free books. Well, Wednesday afternoon I received my first official box of books. 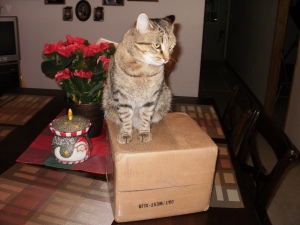 The cat did not come with the shipment.

It’s not terribly big, but the weight of the box surprised me when I first picked it up. I’m amazed that a box this size ultimately held twenty-six books and three CDs. That’s some serious packing voodoo right there. 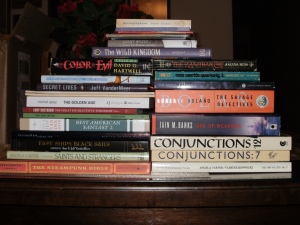 Even better, I can safely say I plan on reading and listening to everything in this box. 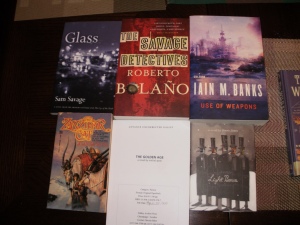 A collection of Joanna Russ stories? You bet I’ll crack that open soon. And I’ve been meaning to read some Roberto Bolaño and Iain M. Banks for some time, so why not start with The Savage Detectives and Use of Weapons? I can attest to the quality of Light Boxes, having read it before, but this is from the Hamish Hamilton printing in the UK, not the US printing I read. Totally different jacket design and everything. Just as cool to be in possession of an ARC of Michal Ajvaz’s The Golden Age. I’ve never heard of Sam Savage and his novel Glass, which makes me want to read it all the more (just as much as the cover description does). 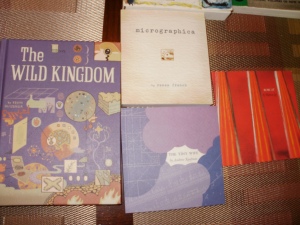 I’ll also get to scratch my comic book/graphic novel itch a bit too. I love Drawn and Quarterly‘s publications, and I’ve been meaning to pick up a copy of Kevin Huizenga’s The Wild Kingdom for some time now. Thank goodness I have a copy now! I’ve never heard of Renee French though, so I’m curious about Micrographica (courtesy of Top Shelf, another of my favorite comics publishers). The other two books in this photo are individually bound and published short stories, courtesy of Madras Press, which sells these stories and then gives the proceeds to charitable organizations. I’ll have to look into Madras more thoroughly in the near future; I love their taste, and I can certainly get behind their mission. 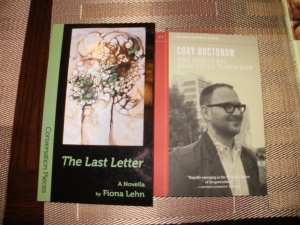 And then I have two novellas, published by different small presses (I am always up for cool speculative fiction coming from small presses). The first, Fiona Lehn’s The Last Letter, comes courtesy of Aqueduct Press. I’ve previously read their Writing The Other by Nisi Shawl and Cynthia Ward (which helped provide the impetus for my recent blog posts about gender and writing), so I’m eager to see their taste in fiction. I’ve also never read any of Cory Doctorow’s fiction before either, so “The Great Big Beautiful Tomorrow” is as good a place as any to start (courtesy of PM Press). 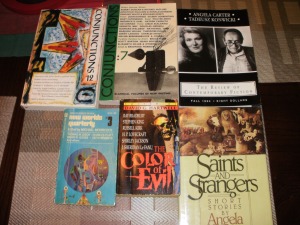 Of course, being the fiend I am for short fiction, these made my eyes widen. I am a huge, huge admirer of New Wave SF and many of its affiliated authors, so I almost squealed with joy when I saw a New Worlds quarterly edition from 1972. Ditto for the vintage issues of Conjunctions, a publication I’ve admired ever since their New Wave Fabulists issue a few years back. Of course, I am always happy to receive another Angela Carter story collection, especially one I’ve never read. The Color of Evil is going to be a great opportunity to revisit some awesome stories and encounter some new ones (three of the stories in the anthology – Ray Bradbury’s “The Crowd,” Shirley Jackson’s “The Summer People,” and Michael Shea’s “The Autopsy – can actually be found in the VanderMeers’ latest anthology, The Weird). The issue of The Review of Contemporary Fiction doesn’t made my short fiction heart sing per se, but it certainly resonates with my brainy, academic nature. Besides, it’s about Angela Carter, partly; no controversy there. 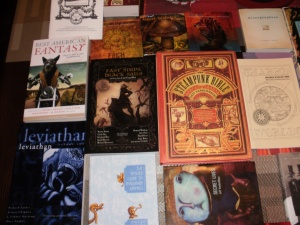 And I netted some previously unowned VanderMeer swag too: Best American Fantasy Vol. 2, Fast Ships Black Sails, The Steampunk Bible, The Kosher Guide to Imaginary Animals: The Evil Monkey Dialogues, and Secret Lives. What really floored me was the inclusion of several rarities. Even since I bought the Leviathan 3 anthology last year, I’ve been on the lookout for the other volumes of that anthology series, but they’re hard to find. Imagine my delight when I opened the box to find a copy of Leviathan 2, devoted to the art of the novella! I do believe I’ll read that one soon. I also received a chapbook from the 2009 class of Shared Worlds, the youth writing camp the VanderMeers are involved with. Can’t wait to read the samples of the teen authors; I love the idea of Shared Worlds, and I’ve wanted to read the work of some of the students for awhile now (a booklet from the latest round of students can be found here).

The other chapbook I received is a real rarity: a sampler of the full edition of the Thackery T. Lambshead Pocket Guide to Eccentric and Discredited Diseases, the precursor of the Thackery T. Lambshead Cabinet of Curiosities. This baby dates back to 2002, seemingly made for the World Fantasy Convention of that year as a means of promoting the then-upcoming Pocket Guide.

I haven’t even talked about the CDs yet. Jeff frequently uses music as inspiration for his writing (a trait I share as well; I often make special playlists for my various stories, just to affect my mood if need be). To that end, he has also worked with and commissioned various artists to make soundtracks to his novels and story collections. Robert Devereux’s Fungicide is a soundtrack to Jeff’s City of Saints and Madmen, for instance. Having never heard Devereux’s work before, I’m looking forward to plugging that CD in. I have, however, previously heard and enjoyed the artists behind the soundtracks for Shriek: An Afterword and Finch: rock bands The Church and Murder By Death, respectively. (If you’ve never heard them before, check ’em out here and here.)

So, my goal for the next few months is to read (and listen to) everything in this box and write a review for it. If I’m going to get back in the swing of things as a reader and critic, this will be a good place to start. And if there’s anything in the box you guys are dying for me to review, let me know; I can surely bump it up in my queue.