I’m somewhat disappointed with my reading this year overall. I thought I did pretty well earlier in the year, while I was still living at home, waiting to hear what would happen with PhD applications and such. Once I moved to Lawrence, though, and started school, my for-fun reading dropped off a lot. It’s been all textbooks for the past eight months, which I very badly want to rectify over break. It also feels like a cheat and, quite frankly, a bore to talk about classroom reading, although I enjoyed reading The Next American Essay, edited by John D’Agata, quite a bit. It’s ostensibly a collection of lyrical/experimental nonfiction writing, but it’s really a mixed genre writing anthology. I found myself reading it outside of class sometimes just because the writing challenged me to recontextualize my own writing and create new reading strategies. So, it gave me a fair amount of mental and creative exercise.

Books I’ve written about here before, which I would include among the best of my year in reading, include Street of Crocodiles by Bruno Schulz, The Divinity Student by Michael Cisco, and Cataclysm Baby by Matt Bell. There are still several books I want to read too. I’ve heard fantastic things about Alice Nutting’s Tampa and Rachel Kushner’s The Flamethrowers, as well as George Saunders’s Tenth of December. For now, though, I’ll wrap up the year in reading with these. 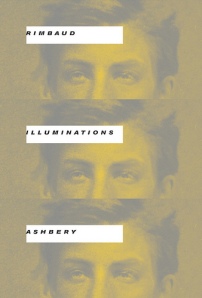 Arthur Rimbaud, Illuminations (Trans. John Ashberry): Rimbaud is probably my favorite poet ever. I have this really intense draw to his writing in general. His poem “Wandering” touches a part of me that I still have trouble expressing at times, and so I let the poem do the hard work for me. The way he uses language to challenge my mind and provoke my emotions, while crafting some of the most beautiful and surreal imagery I’ve ever encountered, continues to influence me. I read all of Illuminations, however, for the first time this year, courtesy of Ashberry’s deft translation. A strong candidate for my favorite book I read this year.

The short fiction of Vladimir Nabokov: I finally, finally got into Nabokov this year. I’ve tried getting into his work in the past, and for some reason it just didn’t click with me in a meaningful way. That changed this year when I read his story “The Leonardo” while helping Jeff VanderMeer with edits on his and Jeremy Zerfoss’s Wonderbook (which is also easily one of the best books I’ve read this year; go get a copy now!). I love the playfulness of Nabokov’s writing and how he so casually manipulates the reader and what she sees without that manipulation feeling jarring or undeserved. I also love how so much of his writing plays on the edges of fantasy without committing to hard-and-fast fantasy tropes. It feels fantastical, which is lovely. 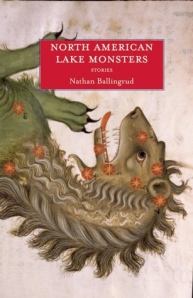 Nathan Ballingrud, North American Lake Monsters: My favorite short story collection from this year, pound for pound. It’s hard to believe that the stories in this collection were taken from almost a decade of publications. It really speaks to the unity of Ballingrud’s creative vision and approach, I think. These are dark, difficult stories, but they’re the best kind of dark and difficult because of their close eye to humanity and the kind of wisdom and awareness one can gain from reading such stories in the first place. It would be hard for me to pick favorites, but there are some stories I consider required reading for horror fans, such as “You Go Where It Takes You” and “The Monsters of Heaven,” which is utterly devastating.

Kit Reed, The Story Until Now: Great retrospective of short fiction from a writer with a long, accomplished career. Reed deserves merit as both a literary and genre writer, I think. She excels at excavating the minds of her characters and ensuring that their perspectives filter how readers interact with stories. The story we reprinted at Weird Fiction Review this year, “Special,” is an excellent example of this. I also love how she either mixes genre tropes freely or outright challenges and flouts them. She utilizes a great deal of freedom in her writing. Maybe that’s why she hasn’t garnered a lot of acclaim in the form of awards and nominations for her science fictional and fantastical writing. That’s a shame.

Lynda Barry, What It Is: One of the best books on writing I’ve ever read. I’m used to reading craft books that are so stuffily academic and interchangeable with each other that there’s no point reading more than one or two in my lifetime. They all say the same things, quote the same people, reprint the same stories and writers, etc. Boring. This book? Not nearly so much. It’s idiosyncratic, sometimes contradictory, sometimes opaque, and always stimulating. It’s also an absolutely gorgeous construction worth reading as a work of art in its own right. 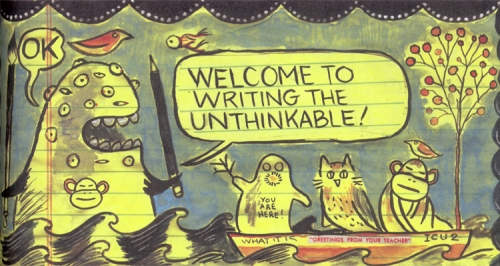 Jeff VanderMeer and Jeremy Zerfoss, Wonderbook: This might be cheating, since I helped Jeff and Jeremy with this book during the editorial stage (copyedits and other assists, basically), but damn it if this isn’t one of the most original and helpful books on writing I’ve ever read. I love the sheer number of people cited in this book, and the idea of reading the voices and opinions of many different writers with many different opinions. A lot of attention has been paid to how great this book looks (and it is gorgeous, by the way; besides Zerfoss’s featured art, there are a ton of other artists included to help demonstrate writerly concepts). In addition to that, I want to point out how objective and fair this book is because of its effort to be inclusive.

Stefan Kiesbye, Your House is On Fire, Your Children All Gone: I read this book around the time I watched The White Ribbon, and they eerily complemented each other, with similar basic story structures: a group of children in a small German town do horrible things to each other and other people while living out often stultifying and hard lives. They’re still different experiences in the end, most obviously because this book offers a possibly supernatural reading of things while Ribbon does not. This book, also, revels in darkness while still strangely offering and developing sympathy for the characters, while still acknowledging the cruelty of the things they do. It doesn’t lead you by the hand in terms of telling you how you should feel about the characters, which I really liked. This is a huge turn-off for some people, who like having characters they can “root for.” I, however, found myself regarding this difficult, excellently written book as my favorite of the year.

Filed under Favorites of 2013